Hema Vyas - If a public building, like MacGregor field house, has water leaking into the basement, the city has to take steps to preserve the building. Its old, its of value, its being used. So the leaking has to be stopped. But the whole process was flawed from the very beginning. What is happening is that the City is going with a one-size-fits-all approach. But all the parks are different. People who use the parks tend to have good ideas of what needs to be done. So as councillor Id want to talk to park users. We should have meetings in playgrounds. Community consultation is everybodys buzzword, but how do you do it? 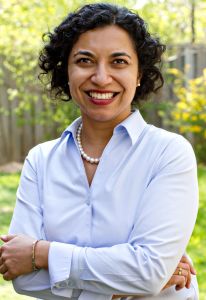 Id want to talk to the park users and to the staff and do a needs assessment. Wed have to get really clear about whats not working. Thats a councillors job, to be ongoing and present in the community. To provide that leadership so that the Parks and Rec staff are involved with park users. If the councillor is constantly reminding people who work for the city about what the community wants, things will get done more quickly. What Im talking about is relationship-building. Its not waiting until the last minute when theres a crisis, or when a certain park staff is moved, and then saying okay this is a crisis, we have to deal with it. Its too late then. Relationships get frayed, people get really stressed out.
My job as a councillor is going to be to plan, to have a process to prevent, as much as possible, crises from happening. Crises happen regardless. But when they happen again and again and again, its because as a councillor youre not paying attention.

Jutta Mason - One problem is that the ward is pretty big, and a lot will depend on the councillors staff. Another problem is, when youre talking about Parks and Rec staff, theres a big gap between the people who work at a site and management downtown. So how would you try to bridge that gap?

Hema Vyas - One of the biggest challenges is between design and delivery. You can be a great designer, but its difficult to anticipate any changes that are happening in the community. The needs of people dont stay the way a piece of paper stays. So its having that flexibility. Its also having Design and Delivery staff communicate regularly. As an evaluator, I have often led working groups, and they usually include Delivery, Design, anyone I can talk to who has historic knowledge --- why this program is taking place  and there might be some community stakeholders. We all sit down and talk about this program. Its probably the most interesting and the toughest conversation that we have  that first meeting. Because the first question is -- whats the purpose of the program? The understanding of what the program is, how it should be working, and what the end result should be, is a little bit different for everyone at the table. The problem is that often, Design and Delivery dont talk, because the person who designed the program has moved on to something else. Or because that person is busy, or because the two sides just never see each other.

Transferring that approach to a park, before we have that first meeting, Id have looked at the design, Id have spoken to the person that did the designs, Id have spoken to the person whos working in the park  so it starts with relationship-building. Because if theres no trust, and if theres no sense that theres a purpose that we all share...Ive never met a design person that didnt want to make sure that their program works. Thats at the heart of it. Were not sitting at that table and knocking what someones doing. Were really just trying to get to the root of the problem. And so making sure that everybodys clear on the purpose of the meeting and what we want to accomplish. And for the first meeting, sometimes it sounds really basic and maybe simple  okay, whats the purpose of the building, what do we use it for? That gets a lot out. What does it look like? Whens the last time the person who designed the building had seen it?

JM - So are you saying that would be a real focus for you, to try and get city management people to come and look for themselves, and talk directly to the people who do use the park?

Hema Vyas -Yes, having staff, including management and staff who work in parks talking to each other and with people who use parks. Its not finger-pointing, its this common goal of making sure that this building is used as well as it could be.

Ive been reading some Paul Bedford stuff, about the local planning boards. What the citys planning department focuses on is application by application. But what we also need in every ward  especially here in Ward 18, because theres so much change happening  is a longer term plan, or vision, for what we need in terms of parks and community centres. And also when plans for building do come up, the ways the buildings should look, the sorts of materials that should be used, the number of stories, whether there are specific needs that we would want that building to address. All of that takes planning and forethought, to build a vision and to attract people to that vision, and thats what I understood about the idea of a planning board.

Hema Vyas - No. What we need isnt always new. What we need may be something that we already, have which just needs to be modified, or which needs to be communicated, or that people need a safe route to get to. Basically, how are our communities networked?

JM - You look a little pained when youre using that word.

Hema Vyas -Yes, it sounds so key-word-ish. What I mean is, how do they fit together in a way that makes sense? How do you get from Bloor and Lansdowne to Dufferin Grove Park on a bike with your kid? Is there a safe way to do it? And if there are some empty lots, or empty stores, along that route, you should also know that. Big on Bloor  they did a survey to find what businesses they wanted to attract. That builds on what we have here  and it changes.

JM -So community consultation is big for you. That raises another problem  as soon as you have people talking to each other about what they want to see, theres a possibility of strong disagreements arising. Public space is a place where small wars can start, in a park, for example between dog owners and non-dog-owners. People have lots of frustrations, and those can sometimes be channelled into neighbourhood public space. Or in Dufferin Grove, a few years ago, some of the neighbours began to say  this park is really getting way too busy. Thats not what we want. We want an area of peace and reflection. Thats a legitimate view of a park, but its problematic in a city. There are a lot of people who want somewhere outside to go, and if those many people find a particularly attractive spot, you no longer have a quiet place of reflection. At Dufferin Grove Park, some people felt that the little gardens, the ovens, the farmers market, the cob kitchen  all interrupted the lovely green vista of grass and trees that was formerly there. Those views can come out as loud disagreements at community meetings. What do you think about that?

Hema Vyas - If I as councillor am going to have a meeting in the park, I can say, this meeting is about  what do you want in a park? -- by the end of the meeting, were going to gather what you think, and then were going to meet again in a month.Wed have to see how the meeting goes. Then Id have to be in the park and see how people are using it. Its not just a single meeting, its online, its getting e-mail, its having newsletters, its getting people to give me input one-on-one, because some people feel uncomfortable in meetings.

Its a two-way responsibility. As a councillor I have to be fair and look in the mirror and say, did I do everything I could, to reach everybody? Did I use online tools, did I meet with people, was I in my office when I said I was going to be? When someone said, look, can you come by to talk about it for a half an hour because I cant get to where you are, thats really tough as a councillor, because theres a million things going on. Even so, Id have to ask myself: did I do the absolute best thing that I could? Did I ask the questions?

Being a councillor, I want to be respected. But I know that a leader cant always be liked for her decisions. Ill never agree with everybody all the time, and if I am agreeing all the time, I may not be doing my job right. But I can say, look, this is what is going to happen in this park, everybody we talked to, this is what they said they want, and this is why. The councillor has to do that research too, to know about all the different park in the ward. So as a councillor I have to be transparent about issues like that, and I have to be clear. People might not always be thrilled with the resolution, but at least I would have gone through a transparent process, and I would have answered the question.

JM - You say you get to an end point. What if, after all that work, Parks management says, no, we wont go along with what youve worked out?

JM -In other words, you would like to help city staff think in about what details concern people in Ward 18.

Hema Vyas - Ill say  its making your job easier.There are a lot of things that are unpleasant for everyone.

Nobody likes to have their name in the paper, when its unpleasant news. Nobody likes to feel that they havent been listening. Nobody likes to look in the mirror and say, well I just wasnt there. So my job as councillor would be to involve people in the process from the very beginning. Its a real pain to get out, and it takes time, and sometimes theres an evening meeting and it sucks because you work nine to five. But taking that one hour or that two hours will save the twenty hours at the end, and will save the crisis management work that the citys been doing.