You are on the [cover page] of folder [Community Building]

In the past few years there has been a new stage in the life of the park  the stage of testing, by often anonymous complainants, whether the things that work well at the park might not conform to City bylaws or provincial regulations.

The zamboni crisis at the rink in 2004 was the beginning. That winter, multipurpose use of the rink house was briefly declared a health and safety infraction.

Last June, 2005, a playground user expressed great unhappiness about the possible illegality of building the cob courtyard, but by then there were too many people engaged in the project to bring it to a halt.

In July 2005 there was an anonymous complaint about people making their own pizzas at the wood oven, resulting in an order for staff to make all pizzas inside the building and rush them out to the oven. That order was quickly found to be unnecessary and rescinded.

In August 2005 there was an anonymous complaint about the farmers vehicles being parked at the market, but after a by-law officer told all the farmers that he would write them each $105 tickets if they returned the following week, an official permit was created. The farmers were able to continue bringing their food as before.

In November 2005 there was a large meeting at St.Marys High School igh SAcHto address the absence of a formal advisory council at the park, but the meeting participants were able to convey their confidence in a park with good staff but without a formal community meeting structure.

In February 2006 a serious standoff developed between City rinks zamboni drivers and on-site staff/rink friends, relating to our local practice of cleaning the ice one rink at a time and letting skaters continue to skate on the other rink. That issue  presented as a health-and-safety issue for the zamboni drivers  will hopefully be solved this year with the long-awaited construction of a little external paved path. The path will allow the zamboni to travel between our two rinks without using the internal gate, therefore not requiring a guard at the gate.

The current regulatory struggle focuses on the community-built addition of a community-built composting toilet to the playground area. There have been complaints led by three neighbourhood activists. They have contacted the heads of City departments to inform them of various possible regulatory infractions.

Now a six-foot-high fence has been erected to keep kids away from this project completely  for reasons not of commonsense safety but of one-size-fits-all regulations. The complainants have asked Councillor Adam Giambrone for another public meeting, and indeed its time for everyone to talk.

Food cart, child minding, campfire. In the rink house if it rains.

This neighborhood is full of musicians: does anyone feel inspired to write a song for the park, called the By-Law Blues? It could have broad appeal beyond the park too, maybe become as big a hit as Little Boxes was in its day.

(1) David: The small fellow in this fable is Georgie Donais. Last year she asked the Parks staff if they might bring in some sand, gravel, later a plumber and an electrician. She went to a local construction company and begged some clay, bought some tarps, and asked park users if theyd like to build a very old-style wall around the public health sinks that were needed for the summer food cart.

It turned out that lots of people, little and big, wanted to learn how to build using the ancient adobe method called cob. As the wall rose, little by little, built by so many hands of so many different sizes, the wall became a story magnet too. It seems that theres hardly any culture that doesnt have such buildings. People brought their photo albums from home, showing buildings in Yemen that are seven hundred years old and still inhabited, round adobe buildings in North Africa, thick-walled cob houses with thatched roofs in English villages. What a lot of joyful community talk and action! Georgies dad was a carpenter, and she admired his craft, but she wanted a form of building that was quiet enough for talking (not all that loud hammering). She was right. As the wall went up, conversations led to friendships  and respect and admiration grew, day by day, for those people all over the world who developed this way of building. Georgie shaped and directed all this activity for free, and people freely came and went between the playground and the wall. Building was part of a day at the park.

At the end of September the cob party for people who helped was huge. The cob courtyard has become a familiar, loved (and useful) landmark in the park.

Now that the Composting toilet has gotten final approval from the city, Georgie Donais put out the word asking for thank you letters to Councillor Giambrone for his support.

THE ROLLER COASTER PROGRESS OF THE PLAYGROUND COMPOSTING TOILET 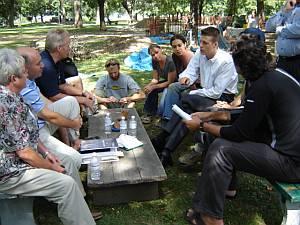 When the big cob-courtyard-building project was going on last summer, people kept asking: so wheres the toilet going to be? For parents and caregivers of young kids, the lack of a toilet near the playground has been a drawback for years. And Georgie Donais has been interested in the ecology of sewage forever  i.e. composting toilets.

The brother of a cob volunteer, living in the southern U.S., heard about the cob project and offered to donate an industrial-strength composting toilet (the kind used in campgrounds and highway rest stops). There was no place for it in the courtyard structure, but theres a good spot nearby, just west of the playground. In the fall, Georgie started talking to the Parks manager about the idea. She proposed building another smaller cob structure to surround the composting toilet. The manager was interested, so last February Georgie designed a beautiful, sculptural little cob building and applied for two small grants to cover its cost. Both grants  $10,000 from the Toronto Arts Council, and $2000 from the Toronto Parks and Trees Foundation  were approved.

The Parks manager has changed in the meantime, and on June 1 Georgie and several park staff met with Sandy Straw, the new Parks manager for Toronto and East York, and Peter Leiss, the new West Parks maintenance supervisor. Georgie showed them detailed drawings, specs, etc. (including the number of bums the toilet can accept before it needs a rest). But on June 7, the manager had to leave for a family emergency, and she didnt get back until June 26. The supervisor was also busy or away for that whole time, and suddenly the whole project was in trouble because the permissions were not ready.

Georgie wrote: I am getting more and more concerned that building season is passing us by; volunteers are now in the park, and we are missing the chance to make use of their skills.

On June 29, we went into crisis mode and talked to everybody including City Councillor Adam Giambrone, about the possibility that Georgie might have to give back her funding if the project couldnt get going. Lucky for us, we were able to get the attention of all those busy management people, and the project is going ahead after all. The foundation will hopefully be done by the middle of July, and then: let the cobbing begin! To find out more, go to Georgies web pages: dufferinpark.ca/cobcourtyard, or read the park bulletin boards. Georgie can be reached at cob@dufferinpark.ca.