The real cost of a Campbell Rink hot dog 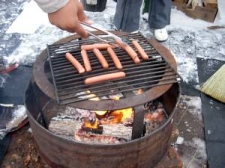 hot dogs on the campfire grill

As he was standing by the campfire at Campbell Rink yesterday, Dougal from the Diggin group asked who was paying for the free hot dogs that were grilling on the fire. He was told "Dufferin Rink cookie money" (i.e profits from the Dufferin Rink snack bar). Despite the low price of the snack bar food over at Dufferin Rink, there's still some extra to put back into the park or into other parks. We said to Dougal, "hot dogs don't cost much anyway, nor does hot chocolate powder -- it's easy to put together some snacks for Campbell Rink."

But afterwards we thought about the cost some more, and about what's involved in making hot dogs and hot chocolate over that simple campfire --

CITY IN A PARK

CITY IN A PARK-WHAT IF WE STARTED LOOKING AT THE IDEA THAT NEIGHBOURHOODS COULD BE RUN FROM PARKS?

I wonder what starts people down the paths of their fascinations  city planners, for instance. Childrens blocks? A romantic encounter in an urban square?

My first exposure to planning came unexpectedly. Maybe I was protesting too soon after September 11. And maybe I was mouthier six years ago. A constable was searching my knapsack. But soon he and I were agreeing that policing couldn't make us safe.

Unless you design neighbourhoods so people can care for each other, he said, the police will be forever doing mop-up. His superior silently poured the juice from my lunch onto the street to illustrate the point.

How much for a City parking lot?

Terry Flynn thought that demolishing the Matador Nightclub at Dovercourt and College to make way for a parking lot made no sense. However it seems that City Councillor Adam Giambrone supported the demolition. So Terry wrote him a letter with some calculations:

(:letter:) I am not sure what logical argument can be extended by the City to expropriate a historical building and tear it down for 20 parking spaces on a streetcar line in 2007.

What if Media Articles were less Polarizing?

We present two articles on local concerns, written within a week of each other, which -- in their original versions Sue-Ann Levy's Toronto Sun article, Paul Terefenco's NOW Magazine article -- seem to further polarize public discussion. What if explicit or implicit insults are removed? Could the issues raised in these articles lead to a working out of some solutions? What follows are versions of the originals as re-written by a CELOS researcher, to explore this idea.

Apocalyptic visions: It doesnt have to be this way

As theatre the drama now playing at City Hall merits a below-average rating. Even by the standards of 100 Queen Street West, the hysteria over the new taxes is over the top. The key players have all settled into predictable messages. But in this excitement there is an opportunity to develop some principles for better governance. Lets hope that Council doesnt lose sight of the underlying reasons for the current financial position. With any luck we wont have a repeat performance next year.

GOOD PARK STAFF ARE NOT DISPOSABLE

Mayor David Miller lost the first round of his attempt to gain some more taxes for the city by charging drivers and new house buyers extra. He may win the next try  after all, cities are legally required to balance their budget, and the 2007 municipal budget was over half a billion dollars too high. City Council will have to do something. Heres the math:

HOW TO CUT COSTS AND STILL HAVE FUN

When Mayor Miller raised the alarm, City managers decided that one way to save money was by cutting the hours of Parks and Recreation part-time workers. Community centres are to be closed on Mondays; outdoor ice rinks are to stay locked until January; golf courses will close a week early; and the cleanup workers will disappear from the parks well before the leaves fall.

CLEANING OUT OUR OWN PANTRY, MAKING DO WITH WHAT WE HAVE