You are on the [cover page] of folder [Bulletins]

This sign was posted on the park bulletin boards, and it led to action.

September-October 1998: new youth moved in to basketball court area. There was loud music with violent and obscene lyrics. They refused to turn it off. There was obvious drinking, and cursing against staff and volunteers when they objected. Also cursing directed at young women walking by, if they ignored or objected to invitations from the group. When some large wooden park compost boxes used as benches for drinking were moved to another area of the park, the boxes were set on fire.

A large sign about park rules was posted beside the basketball court.

During the winter the basketball area was covered with snow.

April 1999: arrival of another new group of about 15 youth at the park. About a week later most of the fence of the community garden was burned up, to which some of this group admitted (without giving any impression of remorse). Some often appeared to be heavily under the influence of alcohol or drugs. Game: mock beatings, with loud screams, of one of their group, so that the park echoed with the noise. This group stopped coming soon after the return of youth from last year. 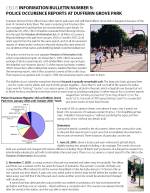 Fourteen Division Police officers have often said to park users and staff that Dufferin Grove Park is dangerous because of the level of criminal activity there. This seems surprising, but Fourteen Division management said that they are not permitted to give details. On September 20, 2005, CELOS therefore requested the following information through the Freedom of Information Act: (1) all Police Occurrence Reports relating to the park from January 2002 to October 2005; (2) all arrest reports from the park for the same period; and (3) all documented reports of citizen/police contacts in the park during the same period. It was understood that names and identifying details would be blanked out.

Click on the bulletin on the right to read more.