Frank DeJong -We live on St.Helens Avenue and I go back and forth through MacGregor Park every day on my way to teach at my school. I was watching the Stimulus-Grant work being done for a couple of months as they dug all around it, thinking, thats good, the basement will be sound and dry. And then they put up those window screens that made it look like a fortified castle! Brutal. 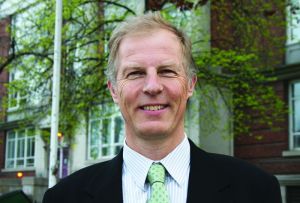 Jutta Mason - Dont worry, they finally agreed to take half of them off, so you can see the windows again. But since you live so near there, I have a question about the Lansdowne narrowing. I was a bit surprised to hear at the all-candidates meeting that, as a cyclist, you thought that the changes they made to Lansdowne make the street safer. Now the street is narrower, and there isnt actually room for both a bike and a truck. So if the truck is avoiding you on your bike, it has to move partway over into the other lane. How can that be safer?

Frank DeJong -Well, the bonus I think is that as soon as you make a road narrower, with more street furniture, and signs and sharrows, it slows everybody down a bit. Its not perfect. Because on the other hand there was that issue with someone who needed Wheel-trans, and it now has nowhere to stop without stopping the entire traffic. I do think, though, that traffic evaporation takes place when you narrow the streets. Not so many drivers are using Lansdowne now, and thats an improvement.

JM - Environmentalist may have a bit of a problem  on the one hand they want there to be more community input, on the other hand if the community input is anti-environmental, then you want to say, well we dont want that. But it seems like many of the people who live on that section of Lansdowne didnt want the change in the road.

Frank DeJong - Often its the vocal minority that comes out to these meetings. And then if the councillor or someone wanted to balance the opposition, they can round up the troops and get the other side lined up. So, thats a hard one. I would say that we have to lean towards the ecological side and the community side and the primacy of the neighbourhood. And the primacy of the neighbourhood would mean that we would reduce the lanes so that people from outside the ward are not using our ward as a freeway. That would make sense. If you can explain it like that to the local citizens theyll say, well, maybe youve got a point there. Maybe those people from Etobicoke and parts west and the downtown, maybe they should be on the go-train, or on transit. Maybe our community should be a self-contained neighbourhood and not be dissected multiple times by people from outside the ward. Im trying to introduce a new way of looking at the primacy of the neighbourhood. I think thats the direction that most people who are thinking about it at all would really like to go.

JM - You mean that their neighbourhood is really their own.

Frank DeJong -Yes. And part of the problem down on Queen Street with the bar scene  if we didnt have this massive capacity to stream cars down there, people would stay home and party at home, and people would work in Etobicoke. They wouldnt have to drive downtown all the time. Its a catch-22. The more traffic capacity you have, the more people leave their own neighborhoods and they dont contribute to their community at home. We are finally realizing how wonderful our neighbourhoods are, and we want to stay home. Thats the slogan of the bio-regionalists  stay home and explore and celebrate your neighbourhood. Party there, shop there, go out for dinner there!

We should have downtowns all over the city. We should have 200 downtown-style neighborhoods in Toronto, in Etobicoke, North York, everywhere, where people love staying on a Friday night. They dont have to get in their car and do the white-knuckle ride down the 427 to go to the entertainment district or the bar scene on Queen West., They should have that quality of life in their home neighbourhood.

JM - Beyond that, looking at the shorter term, I think there are not too many people who think that there was good consultation about the Lansdowne narrowing.

Frank DeJong - I agree with you. But Im looking at roughly a hundred-year plan to re-org the city and to improve communities. Im working to get walkable pedestrian hubs that are not necessarily grid but more spokes on a wheel. You could have a couple of hundred of these in Toronto, for ten-twenty thousand people each.

JM - Going back to the issue of the MacGregor field house renovations: since the other two levels of government came in with part of the stimulus money, the city found that they could borrow a lot of extra money to pay for their portion of the projects cost, and do projects all over the city. If you, as a new councillor, try to find out how the state of good repair process works, youll find out that the payroll of the state-of-good-repair department is a percentage of the amount of money thats spent. So the number of capital projects contracts the city has will determine how much wage money is available for their own staff.''

Frank DeJong - So theres an incentive for them to have more big projects. The bigger the projects, the more money for the payroll.

JM - Yes. So I would say that puts them in a conflict of interest. A small project like a leaky roof may not be attended to because its much better to have, for example, a citywide wading pool project thats half a million dollars every year reliably over ten years. So then you know how to plan your staff.

Frank DeJong -Well it sounds like a ridiculous setup thats biased towards large projects. Council has to rationalize that whole arrangement. There should be no bias toward large projects. Small projects can be accomplished quickly and solve a multitude of a larger issues that can happen if you dont make a stitch in time.

JM -But if Council stops Parks and Recreation from taking a percentage of their new capital projects costs, that means the City can no longer borrow to cover the Capital Projects staff payroll which is basically what theyre doing. So how you are going to finance that? Suddenly you have no budget for their payroll.

Frank DeJong -Well the operating budget needs to be large enough that you dont need to borrow to pay your capital projects staff. Im a proponent of public service. We should have as much in-house as possible, and so then we line up the projects large and small and we allocate the resources.

JM - You mean, return to using the Citys own carpenters, plumbers, and build their own...what?

Frank DeJong -The city can do in-house construction and in-house repairs. My notion is that public service is the fourth component of the economy. Theres land, labour, capital and government. If you have an efficient government, an honest government with stability and expertise, that makes the entire economy move more efficiently and cohesively and happily.

Of course, the public service should not be bloated. If people are sitting around, then obviously the staffing should be reduced. But theres another issue  good preparation through early consultation. When facilities come up for renovation or redevelopment, that is the best time to have consultation, before you spend hundreds of thousands of dollars on a facility, thats the time to get the community involved as much as possible, You want to figure out how is the community changing and what are the needs of the community. So that facilities can be redeveloped or fixed up or expanded or contracted to optimally serve the needs of the community.

And then a councillors job is make sure that you do engage the community  to animate the community. But they get turned off if there are meetings but they find theyre not listened to.

JM - Youre saying they get turned off if they think its an empty exercise.

Frank DeJong - Exactly. And therefore it should not be an empty exercise.

JM -So what would be your steps to animate the community?

Frank DeJong -The first step is, presumably the councillor would know or could figure out who are the movers and shakers in the community. Thats a good thing to find out  the community leaders. And then sit down with them, talk to them, and ask them, okay, who do you know? Can you connect with three or four or ten other people and animate them? Its a pyramid. And animate the community as widely as you can. Make sure everybody knows when theres an issue, get them together electronically and physically.

If you think about the economics of parks, when you live close to a park, your house is worth a lot more. That means you can borrow against it, you can get lines of credit, you can finance education of start a business  theres a lot of advantages to having a high-value property. If people realize that the park adds to the value of their house, theres an economic incentive for people to improve the park.

JM - So you mean that you could say the same of MacGregor Park  you could say this park has become a bit run down, lets see if we can work together to improve it so our houses will be worth more.

Frank DeJong -Yes. Its a culture of public involvement, which needs to grow. You cant just snap your fingers and get it to happen. But it is happening in Ward 18. Were re-inventing our communities there, because for a long time the ward was a sort of decaying industrial rust belt, and then for the next period it was very ethnic and now its turning artsy. Reinventing our communities doesnt happen overnight so we have to build a culture of community involvement, with the councillor and the recreation and the arts. Its something thats built up every year. And its critical for the councillor to animate the community, build it up.

JM - It sounds to me like, as councillor, you would want to be out there a lot, talking to people.

Frank DeJong -Thats right, and offering my vision. Sit down and build on commonalities. Thats the basic way to develop consensus. Its not easy but its a process. Thats the primary use of a councillors time to bring the interests of a community together, develop consensus, thats a win-win for everybody.