You are on the [cover page] of folder [Ward 18 Bookkeeping]

At the second "Community Resource Group" (CGR) meeting about the possible rebuilding of the park clubhouse, ovens, gardens, etc., recreation manager Sue Bartleman said that one good thing about central PFR management taking over the running of the park is that "now we know where the money goes."

But in fact the park book-keeping is a bit of a shambles.

This is a shame, since in the last 6 years the city paid more that $70 million for a new IT system called FPARS (purchased from the multinational software corporation SAP SE). It was meant to...

"...improve accountability and transparency to the public regarding city services; thus fostering public trust in City government by offering better public access...to budgets and related information such as the value of services and the resources allocated to those services." [Excerpt from the Nov.1 2013 staff report on FPARS required by the city auditor.]

But those goals can only be met if the data entry is reliable, and in Ward 18, it's not.

It's likely that Dufferin Grove Park and the related programs at the other Ward 18 facilities are a not untypical example of the poor quality of data entry into the system across the city, and that is worrying.

Wallace Rink and Campbell Rink also have skate-lending programs and yet neither have any skate-lending income listed in SAP at all. Where did that income go? SAP is supposed to enumerate every activity, and connect that activity to the right location.

To track individual programs, the city's financial transactions are recorded with a location code called a "cost centre." Purchases for Campbell Rink, MacGregor Park, and particularly Wallace Rink are often, but not always, assigned to the Dufferin Rink location code. Why?

Even when the location code is right, the amounts don't match.

So we can guess what might have happened, but the reporting is so messy and inconsistent, that if someone on the staff at any of the Ward 18 locations is channeling funds to somewhere else, there's no way to find out through the city's expensive SAP book-keeping system. 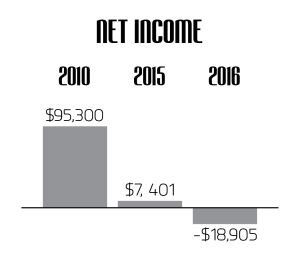 In 2010, the last year of the full partnership between front-line park program staff and CELOS, the Quickbooks accounting program showed grocery expenses of $89,587 and food income of $184,935. Income over expenses: $95,348.

The food costs match up even less than the previous year: the food invoices show $94,461, but SAP shows $144,114. Worst case: the food operations may have lost $18,905 (expenses over income). (Note: in 2016, it appears that the food costs the SAP record attributed to Campbell, MacGregor and Wallace went down a lot -- so perhaps most of the food costs were lumped into the Dufferin location code, hence the jump in food costs.)

When CELOS went to talk to the city auditor's office about the omissions and discrepancies back in 2014, the audit staff said that their office doesn't have the funds to investigate small discrepancies of only a few thousand dollars.

But if Ward 18 is an example of the SAP discrepancies in every city program, the picture that the city councillors and the public get would be far from trustworthy.

Note from Jutta Mason: on May 29 2017 this page was sent to Laurie Owens, Manager of PFR Financial Services, with a request to let me know of any errors she finds here. As of November 25, there has been no response from her.

In addition, on June 5 2017, we submitted a new freedom of information request to the city.