Mary Joe And The Baby

Mary and Joe and the baby 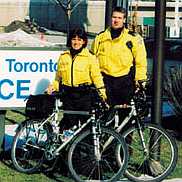 November 2003. Mary (not her real name) is a young woman of 17 who had a baby with her "babyfather" Joe, four months ago. The new mother, father and their baby come to the park a lot with their friends. Many of this group of young people are from the Caribbean. Mary and Joe (not his real name) could be the poster parents for good parenting, teenage or otherwise. They are obviously devoted to their baby and take wonderful care of it. Sometimes there seems to be glow over the three of them.

On a Friday evening about a month ago Mary was at the park for a brief visit with her friends while Joe was at home with the baby. At about 9.30 p.m. ary was walking out of the park to go home and nurse the baby, when two young police officers on bikes stopped her and asked for i.d. Jutta was also at the park that evening, baking some late bread in the park ovens. When she noticed the police, she got on her bike and rode over, wondering what was going on with Mary. One of the officers was talking on a cell phone, and then she turned to Mary and said there was a warrant out for her arrest. Mary said that couldn't be. She said she had been involved in a fight a year and a half before, and had got probation, but that she had just seen her probation officer the week before, and everything was fine.

Officer 5404 (she had no name, but a number) said Mary might be lying, and she handcuffed Mary's hands behind her back. Officer 5404 searched Mary's pockets and found a cell phone and two twenty-dollar bills, and asked her why she had so much money, and - when the cell phone rang - why the phone rang so much. Then officer 5404 summoned a cruiser and prepared to take Mary away. Mary was not permitted to call home to let Joe know she was arrested, but a friend who was watching this had called Joe.

Jutta asked the officer if Mary would be allowed to nurse the baby before she was taken away. The officer asked Jutta who she was, and when she said she worked in the park, Officer 5404 said Jutta should move along then, and go about her business. Jutta asked again if Mary could nurse the baby, but then Officer 5404 said she should be quiet or she would be arrested too - for obstructing the police.

The police car and Joe arrived at the park about the same time, Joe running along the sidewalk with the baby in his arms. The baby was crying and Jutta asked the officers if Mary could just nurse the baby in the police car efore she was taken away. The officer driving the car joined with Officer 5404 in warning Jutta again: if she didn't stop talking to them, she would be arrested and her bike would be confiscated. They said Mary could not nurse the baby, that Mary would be taken to Eleven Division, and Joe could take a cab and go to the station separately - that was none of their concern.

Mary asked Joe to hold up the baby so she could kiss it goodbye. But Officer 5404 jerked Mary away by the handcuffs, and put her in the cruiser.

So Jutta went home and got her car and drove Joe and the baby to Eleven Division. The baby had cried itself to sleep. When they got to the station, there were eight officers behind the desk, just chatting, and Jutta realized that maybe it was a slow night for police.

Mary was there only a short time. As soon as she got there, the people at Eleven Division checked her name and realized this had all been a computer error - there was no arrest warrant. Apparently the computer was acting up - this was the fifth such error that evening. Mary was told she was free to go.

It was bitter cold by then and Jutta took them all home - Mary and Joe and the baby sleeping in her car seat. Mary said she couldn't believe how the police had treated Jutta - they and their friends in the park had assumed that only black people get that kind of treatment. It's true that it's mainly black youth who get randomly i.d.'d in the park by police. But it may be that, in Jutta's choice of staying and witnessing this kind of police activity, she may be in some danger of being arrested too, for being there, the next time. She is careful to speak respectfully but that may not help. It's sad, that "community policing" has come to this: a neighbourhood where so many people know one another; a police force where close to 70 per cent of the officers live outside of the city; and a certainty, on the part of these new young police staff, that they must ward off attempts at bridging the gap: if necessary, by arresting people who try to tell them something about the place where they are, and about how people are affected by their behaviour.

But this time, nobody went to jail. Instead, Mary and Joe took their baby back to their warm apartment. Jutta went back to the park, to take the midnight bread out of the oven. She felt like Mary and Joe and the baby had come safely through the flight into Egypt. And the bread was just fine.

Jutta told this story to the Superintendent Kaproski, of Fourteen Division, Officer 5404's boss. He said he'd look into it and call back, but he never did. Now we'll tell it to the Police Services Board (in case it's changing) and also to Ontario's new Solicitor-General. One of these days maybe a constructive conversation about these kinds of park stories will begin, with people who have the ability to make such stories stop happening.